The main purpose of the here presented experimental setup called CASI (Cluster Apparatus for Silicon Investigation) is the investigation of the caloric properties, geometrical and electronic structure of clusters. The focus of the current work lies on the latter. All the spectroscopic measurements performed on this setup are based on free clusters which exist in the gas phase. To allow the clusters to propagate, ultra-high vacuum is needed, otherwise they would collide within picoseconds with molecules in the air. Since the particles motion is controlled by static and pulsed electric fields, it is favorable to use negatively charged clusters. The production of the gas phase clusters takes place in the aggregation tube of the source chamber from which clusters of one specific charge are continuously guided to the trap chamber. Caught in the trap, the clusters thermalize and are injected in pulses into the time of flight mass spectrometer (TOF-MS) chamber. This chamber is used for mass separation and focusing the cluster package onto the ion detector. For photoelectron spectroscopy, the cluster packages can be bent perpendicular to their direction of propagation and irradiated with a laser beam in order to detach electrons which propagate through the drift tube towards a detector. 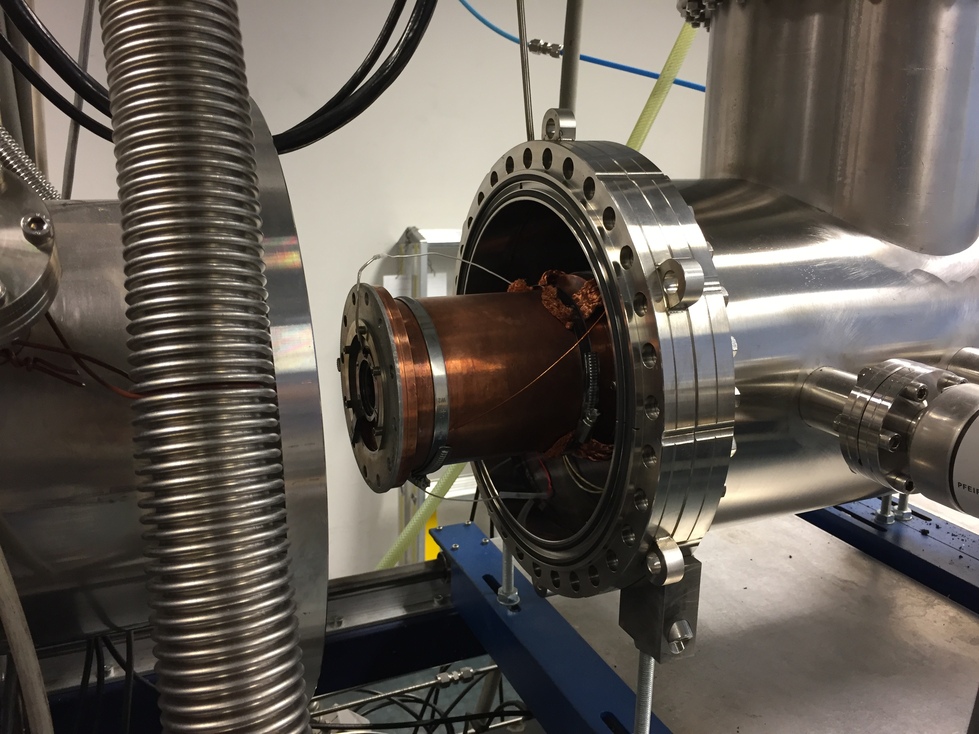 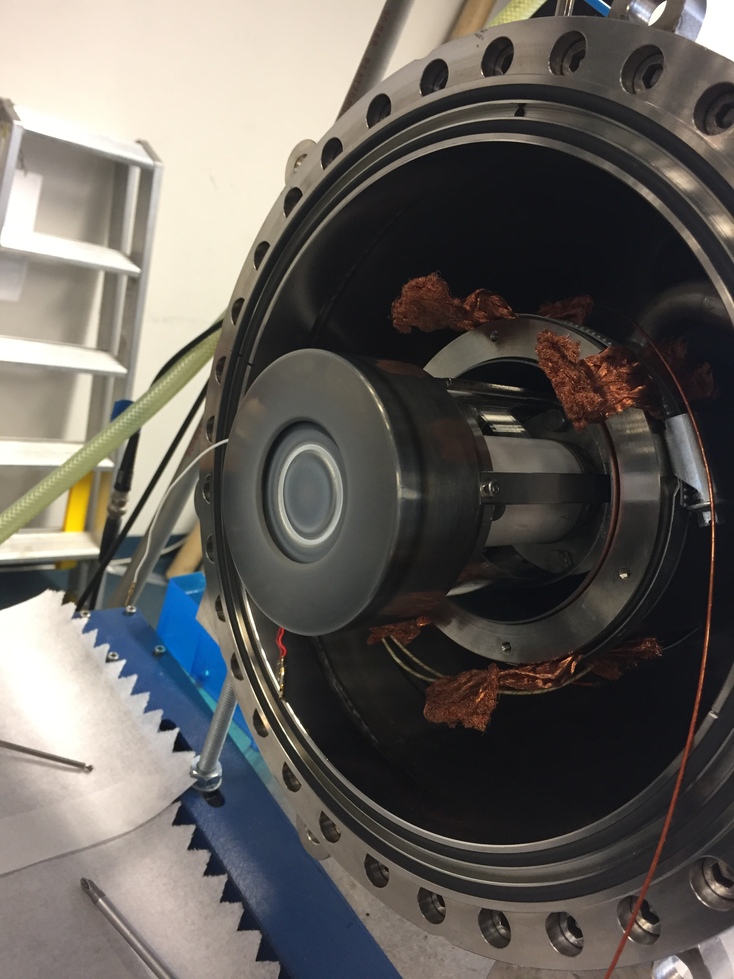 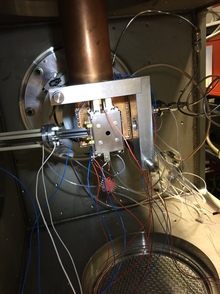 The trap is the key component of this experiment since it increases the ion intensity. It consists of an entrance and an exit electrode with twelve rods in between. A radio frequency is applied to them, so that neighboring rods have opposite polarity forming an effective potential that is minimal at the center.
In order to keep the clusters for a certain time in the trap, the exit electrode is on a negative potential relative to the trap’s reference voltage and the entrance electrode is slightly positive, pulling the clusters into the trap. The exit electrode is pulsed so that some of the clusters are extracted and fly into the acceleration region. Due to continuous loading of the trap, the ion density inside is permanently very close to the space charge limit. When extracting the clusters with the maximum rate of 1 kHz, only 1 − 2% of the trap’s capacity are pulled out with every trap exit so that the trap can still be assumed to stay completely filled at all times. On average, the ions stay in the trap for about 1 s. During this time, the clusters adapt to the temperature of the copper walls around the electrodes by collisions with helium buffer gas. This is necessary to assign them a well defined average temperature. Due to their long stay in the trap, their temperature distribution is assumed to be sufficiently narrow. Besides the now well defined cluster temperature, the second reason for trapping the clusters is to inject them pulsed into the spectrometer in order to get higher cluster intensities and to separate them. 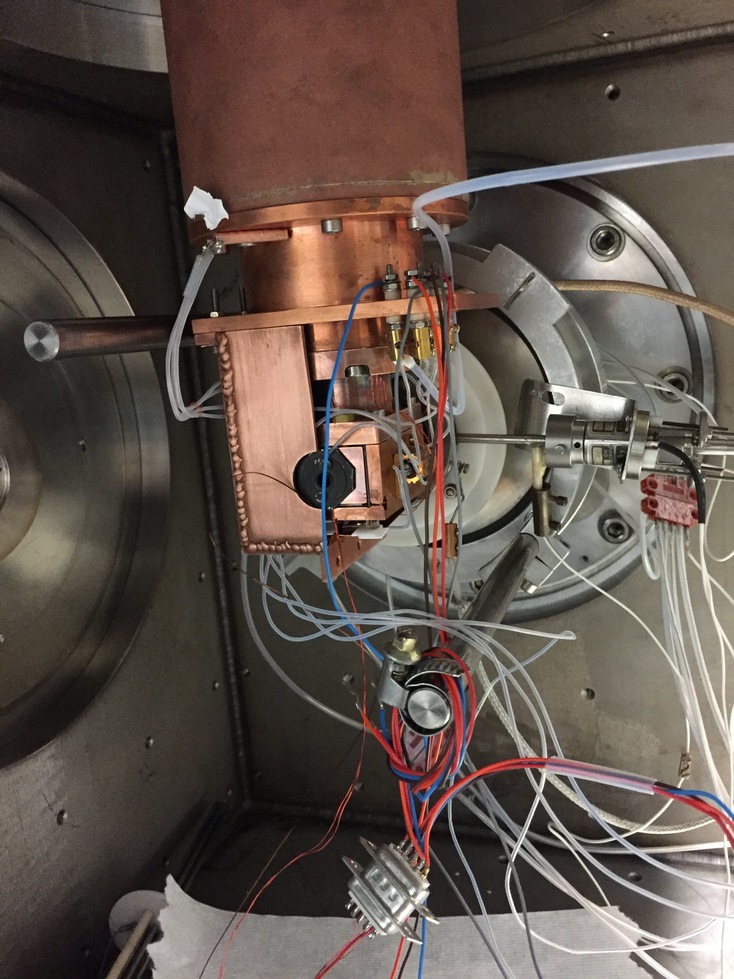 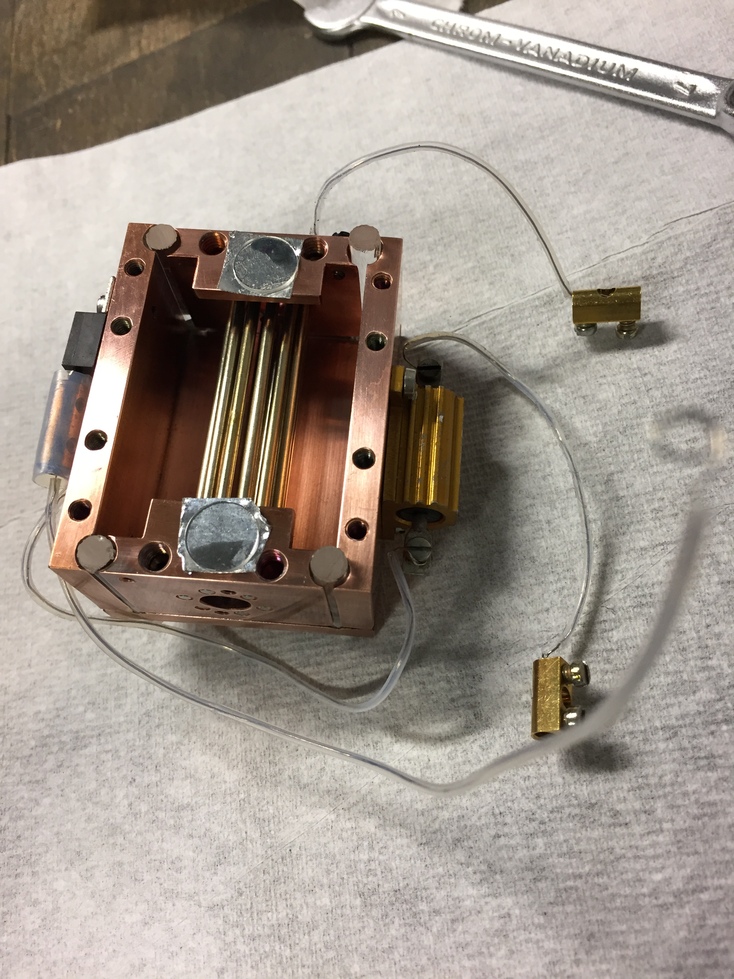 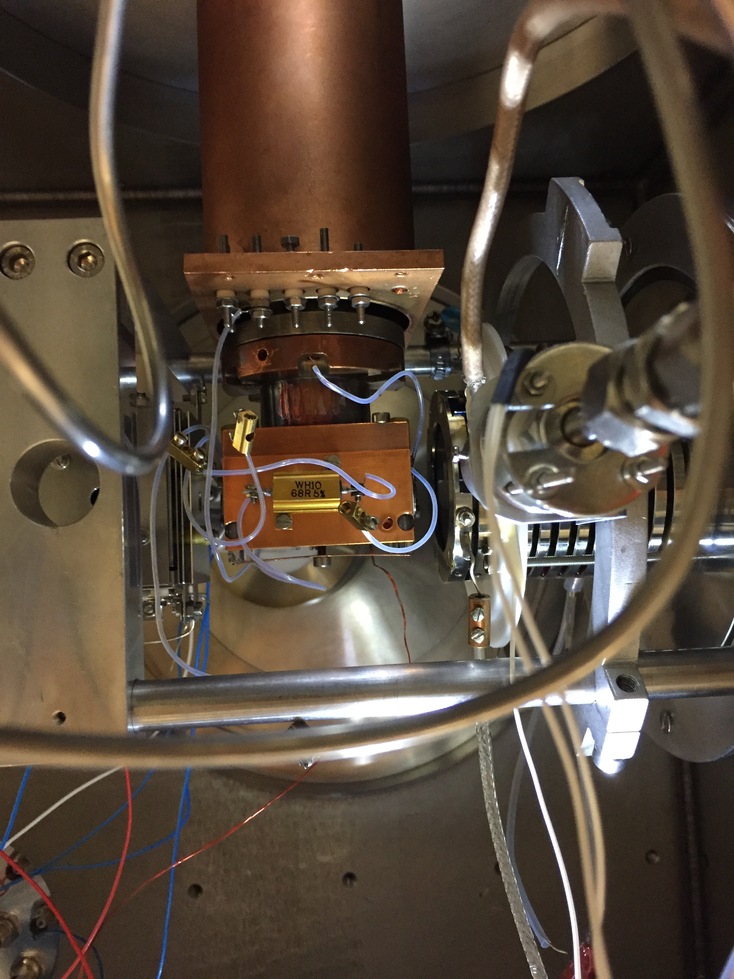 The used spectrometer is a time of flight magnetic bottle photoelectron spectrometer which is here depicted. Its purpose is to determine the kinetic energy of the electrons detached by a laser while measuring their time of flight in a field free drift tube. The laser light leads to electron emission in all directions and therefore the electron yield on the detector with 3 cm diameter mounted 1.605 m away is in the percent to per mil range. This disadvantage is addressed by a strongly divergent magnetic field, the so-called magnetic bottle, which guides nearly all the electrons to the detector. However, the so generated different trajectories lead to a decreasing resolution. We implemented some improvements of this type of spectrometer overcoming this drawback. The high resolution of this recently developed photoelectron spectrometer allows us to see vibrational transitions which could not be resolved before.